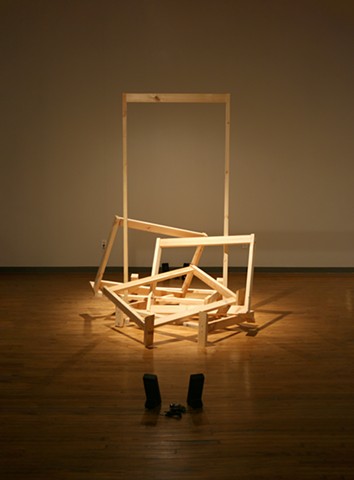 The Measure of Man
Wood and audio
< previous next >

This sculpture consists of several wooden hurdles based on those used in the 1904 Olympic Games held in St. Louis. Included in the pile of hurdles is an exceptionally tall hurdle. On either side of the sculpture two audio tracks played simultaneously: a reading of the official results from the 1904 Olympic Games and a reading of the results from Anthropology Days, a concurrent athletic competition in which tribesmen who were a part of the 1904 World's Fair were asked to participate so their performance could be compared to the Olympians. While each audio track can be heard separately when standing on either side of the tall hurdle, a cacophony of names and numbers was heard when standing closer to the sculpture.